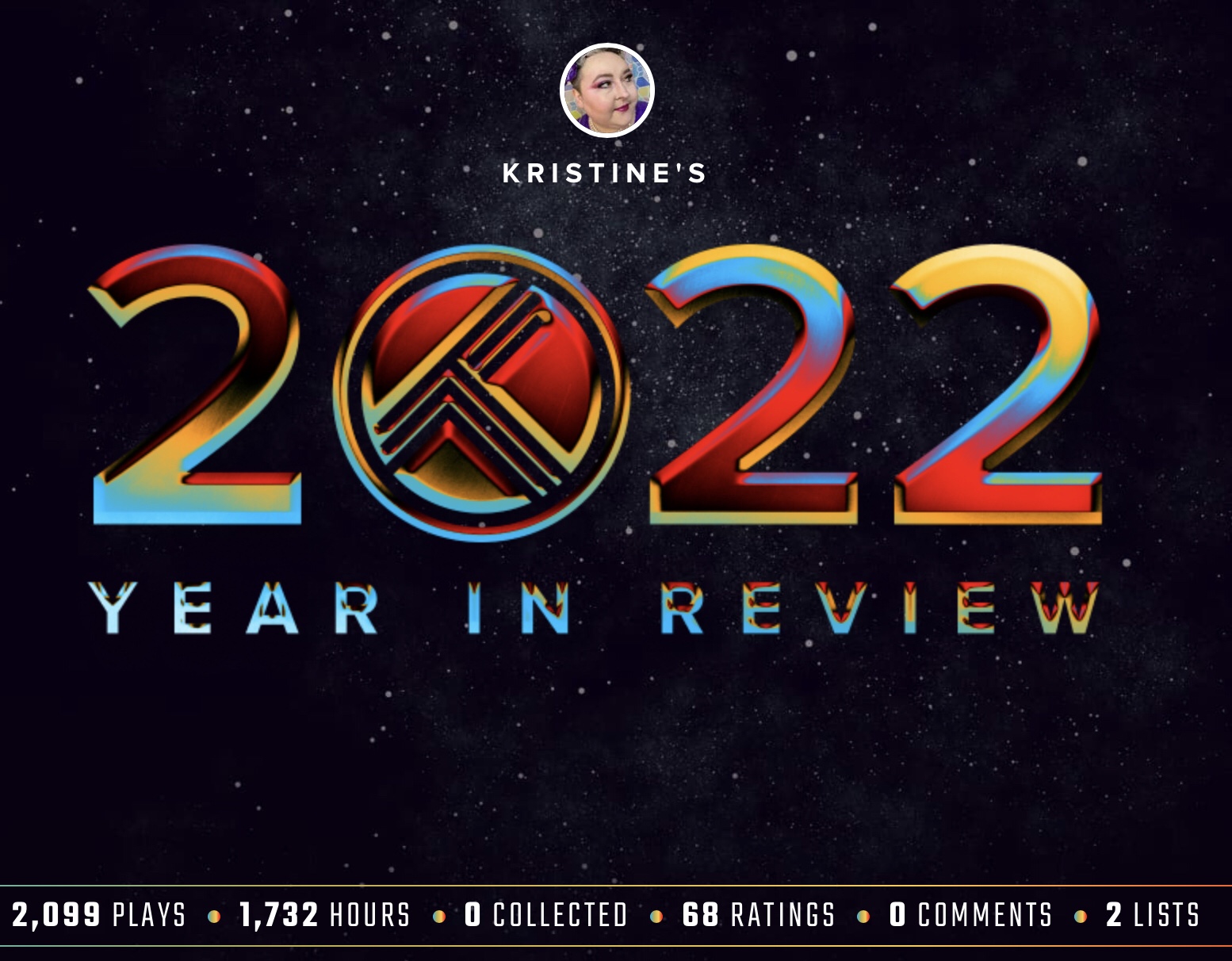 For 2021, I did a nice write up of the things I watched. I enjoyed that and decided to play with that again for 2022 too. I use the site trakt.tv to mark down all of my watches, tv or movie. I’ve encouraged a few friends that this site rocks and so now I am also watching some of their watchlists too, and that makes group tv even more fun. Also, I love the Watcht app for my logging to Trakt because it has some easier options for seeing which streaming service the shows are on, and let’s me most easily track multiple watches of the same episode because I’m a creature of comfort and need to rewatch things often.

So where did my watching go in 2022? For one, I watched more movies than I have previously tracked years. I marked 116 movies as watched (compared to 46 the previous), and I think that some of what contributed to this was group movie nights. With the pandemic came improvements to watch parties on all of the major streaming services, and even though there are bugs in some of the ways they work, they do allow me and friends across the country to enjoy watching and chatting.

My most watched movie studio, unsurprisingly, is Marvel, followed by Disney. I’m rewatching the Marvel Cinematic Universe, but I’ve also watched a variety of Disney and Princess movies, many as rewatches, but a few new. Tangentially related to the MCU was the X-Men universe too.

There were some disaster movie rewatched, and some interesting adventure movies – the new Jungle Cruise was awfully fun. And I watched all of the monster universe when I had HBO Max again – Godzilla and the like. Another watch party of interest was all of the Lord of the Rings and Hobbit movies, followed by the new Lord of the Rings: Rings of Power series on Amazon Prime. Hocus Pocus and the new follow up was another exciting pairing.

Holiday movies and shows also counted towards some of my late in the year watching. A few notable things included:

Then we move to the TV side. I tend to do a mix of old shows and new shows, but this year I had less network shows that I was paying attention to, so that changed some of my behaviors.

I did watch some TV shows that had high episode counts, both as rewatches and new to me shows.

As I look through my list, I’m kinda astonished at how many things I did watch last year. But being more disabled def has me spending more time in bed.

It’s been a lot of fun to look back at last year and think about what 2023 will bring for me in terms of entertainment. I’m also listening to some audio books and that is bringing me joy! And that’s the story…

Made a gratitude tree in tandem with my Rina and a

Some fun #yarnings going on over the last few days

I was very Lilo and Stitch today 🙂 including earr

Food for one, and breakfast companions of birdies

This was a quick look for PT yesterday, with a tou

Today I wore my #CinderSweater to an appt and put

Another handknit that I didn’t have pictures of!

Multitasking. Rewatching Saving Hope and playing Spyro. A little different spot than normal but ...still all the same pillows to prop me up makes it feel familiar. https://instagr.am/p/CoL7HPfr9sJ/

Sometimes, you just need to rewatch a show that seeing the characters on the screen make you smile ...even if it’s not a cheerful scene! Saving Hope it is 🙂

I will gladly wait weeks for #Spoutible to be less buggy, if it means someplace SAFE for people. No... more harassment, no more fascist ideology... it's going to be beautiful.